Here is one thing I plan to do at the beginning of the year. Last year, my school was suffering in the midst of a lot of tension and anxiety around issues of race and identity. There were a few days when I had students screaming at each other, running out of the room, many in tears. Everyone was hurting, but nobody really knew what could be done about it, including me. I had recently heard from my colleagues in the world language and ethnic studies departments, about a powerful poem called In Lak’Ech. In essence, it is a poem of unity, and a few teachers were actually beginning their classes with a recitation of this poem, as a way to set the tone of the class. I really like this idea, and the poem seemed to resonate with some of the Greek and Roman philosophical discussions of friendship I had read. As a result, I decided to translate this poem into Latin, and teach it to my students. When I presented the poem, I wanted students not only to learn and think about it,  but meditate on how it can Find expression in their own lives. We had also been doing a lot of talking through our issues, and it was time for a break. So I asked them to take the Latin text, write it out on a piece of paper, and then write out the same poem in a language that they most identify with. I provided English, Latin, and Spanish, but I invited students to translate the poem into their own language. Students would then illustrate these poems, and I would cover a wall with these pictures.  For the rest of the year, every day, we began class by reciting this poem. And every day, students could look over and see that a wall in the classroom had been dedicated to this poem, and its unique and multi cultural expressions from their classmates.  If you are looking for a way to build community in your classroom, I invite you to try this out. 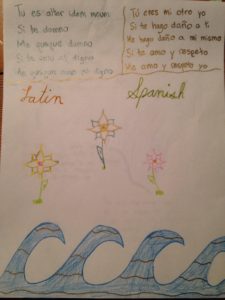 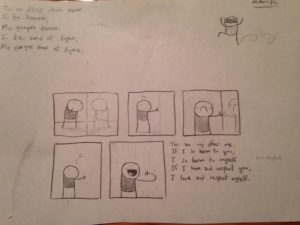 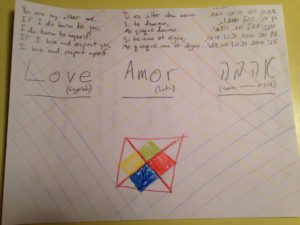 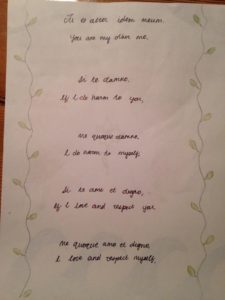